The objective of LA-ROSES is the development of a teleoperated robotic consolle for laser assisted suturing of corneal wounds in keratoplasty (cornea transplantation). The robotic platform, which will be developed in the framework of the European Project ECHORD++ (http://echord.eu) will be useful in several ophthalmic surgical applications replacing the stitches inserted inside the eye for suturing. Examples of applications are: the laser welding of full-thickness corneal transplantation, surgery in the anterior lamellar, in endothelial transplantation, congenital cataract surgery and, more generally, for the closure of corneal incisions. One of the main advantages, thanks to the reduction of the inflammatory reaction, of such laser robotic platform will be the reduction of the post-surgical recovering time. Laser welding also allows the suturing of the cornea endothelium which is impossible to seal using other surgical techniques.
The LA-ROSES project is under development by a consortium composed of both public and private companies including IFAC-CNR (Institute of Applied Physics – National Research Council), EKYMED S.p.A. and FASTENICA S.r.l..

The aim of the developed vision system is the automatic control of a molten metal dispensing system. The flow of the molten metal is acquired and predicted by a Neuro-fuzzy control system. The Neuro-fuzzy system compensates the change in the orifice diameter and the level of molten metal in the tundish as to obtain the same desidered level for successive pours to accurately fill the moulds. 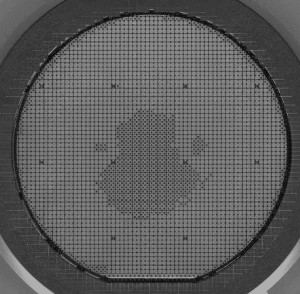 The ChipCounter system integrates a novel vision system able to count the number of “good” chip on a wafer starting from an high resolution image of the wafer itself. The vision system operates in the same way in spite of different chips type. A “good” chip is a chip without any dark spot, or marker, on its surface. The marker could be made by a testing chip system or hand-made by a human operator after a testing operation. The vision system is able to discriminate between a good and a marked chip. The total number of the “good” chips is the result of the difference between the total number of the chips (goodies + wicked) minus the number of the marked. The vision system deals in the same way with very different chip shapes: they can be composed of several areas either connected between them or not. Also, the marker is not required to be well sharpened or to have a particular shape to be recognized. An input for the system is the image, the whole or a part, of a good chip as a sample pattern for the current wafer: there are not different procedures or algorithms according to a particular chip; a bad chip is a good chip which differs from the sample pattern according to specific criterions. The ChipCounter system has been developed for the Semikron company in Pomezia (Rome, Italy) in order to achieve internal management objectives related to manufacturing processes and for the improvement of the chip counting state of the art. 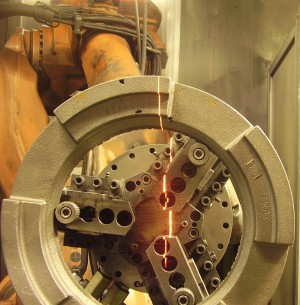 A robotic cell has been developed for automatic deburring of various types and sizes of casting iron objects. Up to date robotic deburring systems do not use information about the burrs dimensional characteristics they have to remove. The deburring tool or the iron casting object directly put into contact with the grinding wheel are moved by the robot along the deburring path applying a constant removing force with a constant robot speed. Our solution consists of in having a 2D laser scanner which detects morphological characteristics of the burrs during the process but before the removal phase; these measurements are used to provide measurement related contact force values to the robot controller which has to drive the robotic arm in order to apply the correct removal force during the deburring task. These measurements are also used by the controller to properly adjust the grinding wheel speed or the rotational deburring tool speed according to the robotic movement speeds in order to achieve an optimal removal of the burrs.

This site uses cookies to improve their services and experience of readers. If you decide to continue browsing we consider that you accept their use.Ok